My 7 year-old loves dinosaurs of all shapes and sizes, so it was no surprise that when we had the opportunity to review a few of the new Learning Curve Dinosaur Train InterAction Toys, he jumped at the chance to help test them out.  Based on the wildly popular and funny PBS Dinosaur Train television series, Learning Curve InterAction toys represent the shows characters in a very real way. The toys are all able to interact and talk with one another and each can say over 50 amazing sounds and phrases!

“Learning Curve’s Dinosaur Train line utilizes Smart Talk Technology that brings the dinosaur characters to life and incorporates educational elements from the series for interactive and engaging play. The Dinosaur Train InterAction Figures combine imaginative play with this unique built-in technology, enabling the characters to recognize and react to one another. The result is a fun-filled, entertaining and educational experience! In addition to being able to recognize and respond to other Dinosaur Train InterAction toys, each character is fully articulated and is packed with one-of-a-kind dinosaur features, including a minimum of 40 dinosaur sounds, facts and character phrases.  With multiple activation touch points that trigger a signature dinosaur feature, such as stomping or chomping, Dinosaur Train InterAction Figures provide hours of interactive and imaginative fun all by themselves or alongside the other dinosaur friends in Learning Curve’s line.”

We were able to review two of the Dinosaur Train toys from the Learning Curve line. Ned the Brachiosaurus and Tank the Triceratops were the dinosaur friends that we had the opportunity to play with and they were great! I really love everything about these toys and so did the boys. My oldest two weren’t very interested, but that is to be expected. My 7 and 4 year olds loved them though and fight over them quite often actually. 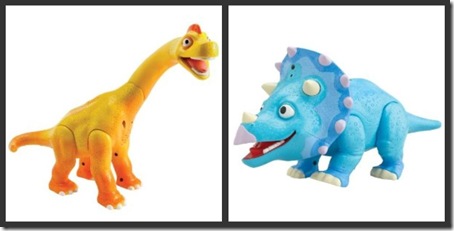 The main things I love about these toys:

Things the boys really loved about them (in their words):

I could tell you how these guys work, but I think it is easier to let one of the boys show you how it is done. The video below is of Jayden my 7 year old giving a little demonstration of how he plays with Ned and Tank.

Learning Curve’s Dinosaur Train InterAction Toys can be purchased at stores like Toys R’ Us, Target, Wal-Mart and online at Amazon.com for under $20!

*  I received two Learning Curve Dinosaur Train InterAction toys for the purpose of review, but was not compensated for this post in any other way. The thoughts, words and opinions expressed here are entirely my own and were not influenced by anyone else.